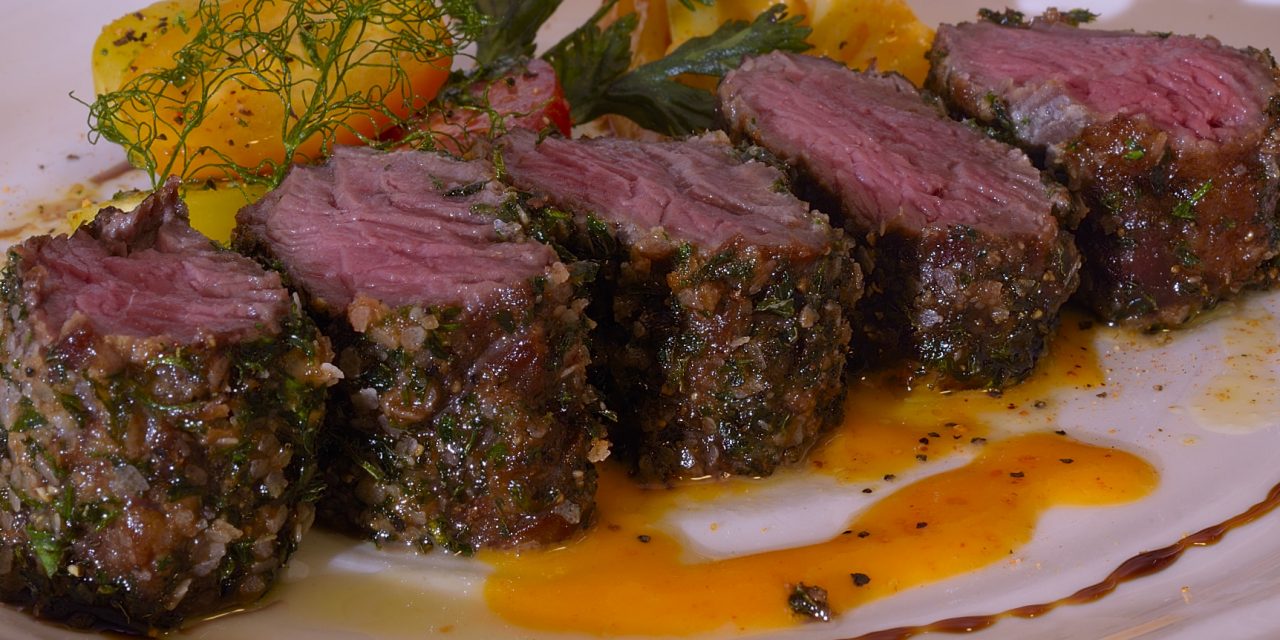 In the 70’s, long before we were so painfully familiar with words like “pandemic,” “quarantine,” and “social distancing,” I worked for a Swiss chef. When he said “steak” he meant only one thing–a “New York” steak, aka strip steak, shell steak, Kansas City steak, etc. Everything else was either a filet, an entrecôte or a top sirloin. Clearly, his interpretation was the exception. Meat departments call all kinds of things “steak.” I suppose they hope that less experienced shoppers will take this to mean the cut is wonderfully tender all on its own. In reality, the word “steak” is little more than a vague description of the shape and/or thickness of a cut of meat (or fish). In my experience, the term says nothing about tenderness or the overall desirability of the cut.

And so it is with hanger steaks. Not only is there no way to make a hanger steak look like a New York or any of the other “steak-like” cuts, the lack of resemblance doesn’t stop there. Trimming leaves us with an irregularly shaped, labor intensive cut of meat that we aren’t quite sure what to do with. We already feel quite safe in our suspicion that it was over priced. Located in the belly/abdomen of a steer/heifer, it doesn’t move around a lot. But the hanger doesn’t just hang there either. It supports the diaphragm and its contents. It is far from idle. There is a lot of gristle on the membranous surface which weaves its way into a coarsely grained, elongated pair of muscles. We will forego the scavenger hunt for the costly marinade ingredients, a Machiavellian peddler’s dream–blindly purchased as if vital while functioning only to create a mess and occupy space in a garbage can. Read on to find out why.

Among the many lies

Hanger steaks (I always want to spell it “hangar”) are frequently described as “packed with flavor” which is code for “tough like shoe leather.” Recipes almost always include a special marinade, a heretofore closely guarded, miraculous tenderizing/value-stretching formula finally being propitiously divulged by the foreign-born creator’s descendants for the benefit of mankind.

Members of our Facebook Group are familiar with the scientific evidence explaining that other than the sodium ions (salt) they contain, marinades cannot penetrate the surface of proteins beyond a millimeter or two. Neither can they tenderize those proteins. Even celebrity chefs and trade magazines have finally come to admit that this is true. My many detractors still revile me for having asserted it over the years. They do not know how much I WANTED to believe that marinades worked. Of the dashed romantic notions that I have accumulated over the years, that ranks fairly high on the list. Oil to sear the steak, 1 oz/30 ml. Water cooler discussions attempt to resolve which oils are best for searing. I usually mutter something like “if you can tell what kind of oil you used, you probably used too much” before I stalk off.

Demi-glace, or your own preferred version of “brown gravy,” about an oz/30 ml. Preheat the sous vide bath to 130 F/54 C. Vacuum seal the steak in a heat rated bag and process at

Sous vide intervals are very forgiving once the desired amount of tenderization is achieved, especially in the lower range of temperatures. I would set my own preferred limit at about 14 hours for this particular item, but it really wouldn’t hurt it to go longer. The release of moisture at that temperature is very slow. If I wanted to have hanger and eggs for breakfast, which I might, I would drop it in the bath either just before or just after Jeopardy, 7 pm Pacific.

When To SHOCK and When NOT to SHOCK.

For a full explanation of cold shocking, click on the italicized links above. The summarized version is that once proteins (like our hanger steaks) have been processed, they may be seasoned, seared and served immediately. HOWEVER, if they have been sous vide pasteurized as per food safety guidelines, (like our hanger steaks were) the sealed packages may then be “cold shocked”–chilled in iced water to 70 F/21 C and then refrigerated to 40 F/4 C for service later. If the plan is to store for later service, the proteins MUST be pasteurized as per the guidelines in order to meet food safety requirements.

We are going to demo the hanger steaks both ways. Current temperature: approximately 130 F/54 C. I say approximately because as soon as you remove the package from the bath, it begins slowly to cool. Very slowly. Still. The shape was ungainly, so I folded it to fit in the bag. The juices from the bag were saved for further processing. Sous vide removes the sticky albuminous proteins from the surface, so we apply some powdered egg white to help seasonings cling. Use one of those handy spray bottles filled with water to dissolve the egg whites. Just a simple application of a little kosher salt and ground black pepper. Preheat the skillet to approximately 350 F/176 C. Just a few drops of oil is plenty. Searing takes as long as it takes. About minute, maybe less. Make it brown. Not much to look at in this state. Tarted up with a little demi and glace, cherry tomatoes tossed with the olive oil, kosher salt and a purple potato. Crispy sage leaf. Note the color of the meat. Loaded into cylinder/biscuit cutter/cookie cutter, you press the tomatoes down a bit. It’s gonna capsize eventually, so you make sure everything else is done before you pull off the form. If you want to do this in a restaurant, the servers ceremoniously remove the cylinder at the table. Unless they forget.

The procedure for searing remains the same, other than the fact the “steak” is 40 F/4 C instead of at 130 F/54 C. This means that retherming will take 3-4 minutes instead of just a few seconds. It is admittedly difficult to measure the internal temperature of a “steak” this size, or even considerably bigger. A little practice using the pinch/poke method is beneficial. In an attempt to discourage “overthinking” the procedure, I frequently tell people “just make it hot,” or even “pretend that it’s raw.” This piece is shaped differently, because that’s the way the hanger steak is, as I mentioned. We split it lengthwise to make it resemble the first piece, somewhat anyway. Again, note the color. As you can see, or at least as far as I can tell, there is no appreciable difference in the “hue.” Shock around the clock

So why not shock everything? Why not indeed. As I mentioned, sous vide processed proteins should not be shocked cold for later service unless we are SURE they are fully pasteurized. This is a food safety requirement discussed at length by Baldwin. I pasteurize/preserve most proteins. But let’s say I want to serve an extra rare Filet, New York or Rib eye. We must take into consideration that pasteurization and subsequent cold shocking tends to cause the “steak” to lose some of that cherished red color. Especially if that pasteurized steak spent more than a day or two in the refrigerator. The steak will be safe to eat for weeks, but the color may deteriorate somewhat.

In this case, the color seems to be intact. While the difference is usually difficult to distinguish, it only makes sense that if you cook a steak medium rare, refrigerate it overnight and then reheat it the next day, it is probably not going to be as rare as when it was originally cooked. This is as true of sous vide as it is of traditional methods. Myoglobin (not blood) is an oxygen transporting intramuscular protein that creates that red color, and myoglobin oxidizes over time–even if there is very little oxygen present. You may get lucky, as they say.

As a general principle, I usually pasteurize tender cuts like New Yorks, Filets and Rib eyes, but I almost never shock them cold for later service. I bought quite a bit of hangers, so I’ve been working through them. Here’s a few alternate versions: From the wider end.

With the jazzy vegetables, terrined 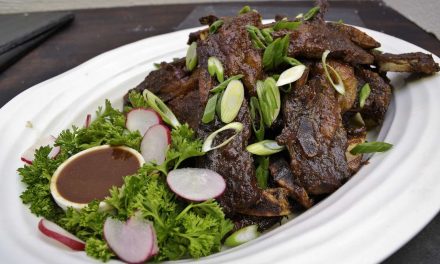 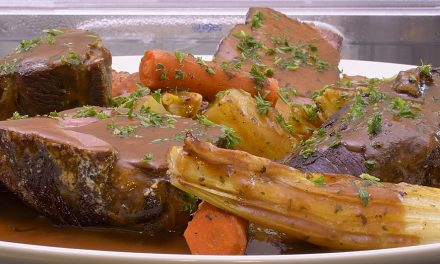 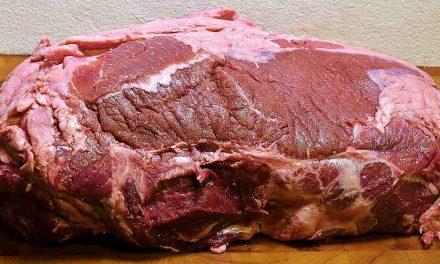 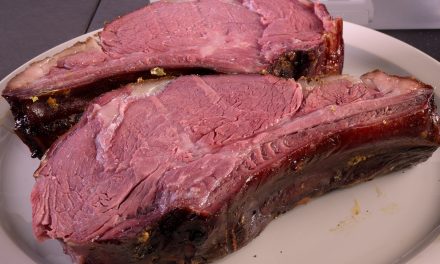