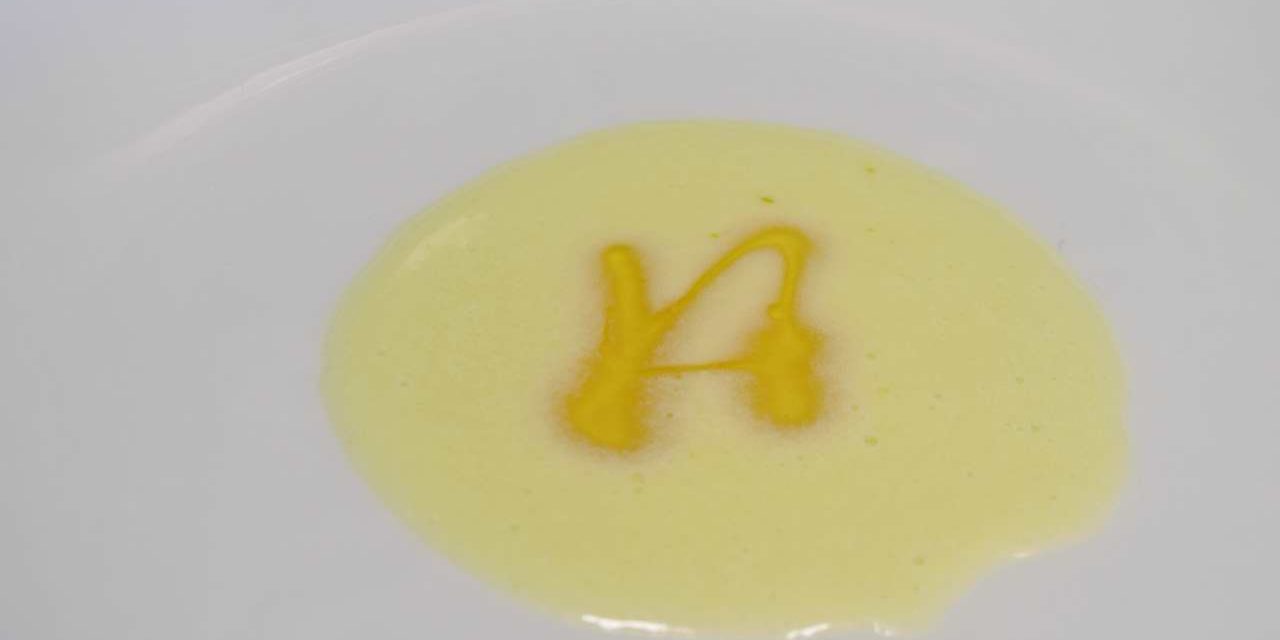 Chemistry. Chemistry is amazing, and I say that having pretty much not cared the least bit about it in high school. Maybe if they had told us that brushing our teeth and combing our hair was chemistry, I might have felt different. Maybe if they had told us that the attraction between boys and girls depended on chemistry, I might have taken greater interest. On the other hand, I had plenty of interest in girls back then, and augmenting it might not have been such a good idea.

Flash Forward. When people start learning about sous vide, they almost always learn a little bit about chemistry, even without knowing it. The simple discovery that sous vide is a function of time/temperature drags chemistry, and the dreaded algebra, back into our lives.

And so it was…

We’ve decided it’s okay to use some of that stuff that they taught us against our will so long ago. I do remember Chemistry. Bunsen burners and twitching frogs. And emulsions. Weird ones with saliva and iodine and stuff like that, as I recall, nasty. But, as sauces go, emulsions are where it’s at. Escoffier set the proverbial table when he created the Hollandaise type emulsion sauces as a category in his system of order.

There is some debate about whether sauces with flour in them are emulsions, andt I am loathe to try and settle that one here, today. Briefly, flour does not do what people think it does in sauces. Flour does not dissolve in liquids. Flour has a tiny surface, like a grain of pasta, that water can penetrate. When you add heat, the little grains of flour inflate like balloons, creating the APPEARANCE of thickness, and emulsification. After that, things get sticky pretty fast, literally and allegorically. If the sauce is abused, via temperature or friction, or even just as a matter of time, the little balloons weaken and burst. This is why sauces, all sauces, break, eventually.

Sauces thickened with flour started falling into into disfavor in the late 70’s. A lot of people seem to think that chefs just started using cornstarch and arrowroot instead, haha, sorry, I gotta laugh, but, no. When chefs started turning up their noses at using flour to thicken sauces, they didn’t just find another starch to use. They eschewed the principle of starch thickening in its ENTIRETY.

People also came under the impression that sauce thickening was being accomplished through reduction, a misapprehension. Chefs actually told people this. Maybe they just didn’t want to try to explain continuation and dispersion. Sadly, this resulted in some really awful sauce making.

I would watch ill informed cooks earnestly reducing heavy cream, changing it from pan to pan as it began to scorch, totally ignorant of the futility of their efforts. Some cooks (and potwashers) would literally weep in relief when I showed them that adding a little butter to that cream would do the trick. Others were so invested in their notions that they would just reject the idea on its face, and walk away.

I knew guys that would carry a little flour in their pocket so they could cheat if it got crazy busy on the line and their buttery emulsion sauces were being troublesome. Getting caught doing this ranged from hilarious to career ending. The fact is, if you master emulsion, you really can almost do entirely without flour as a thickening agent. Chefs didn’t really stop using flour entirely, they just set emulsification as the standard, instead of as a novelty. Emulsification ruled, and it still does today.

People in the Facebook Group are familiar with my assertion that food is merely a delivery system for salt, sugar, and fat, just as tobacco is merely a delivery system for nicotine. There is a lot of truth in this, and the scientific evidence confirms that the brain responds favorably to the detection of those components in food. Your taste buds and your brain are so intricately and inexorably linked that scientists scratch their heads in wonder at it. Taste buds are the only nerve cells in the body that can regenerate themselves after being damaged, which is amazing in itself.

Water does a terrific job delivering flavor to our taste buds. Okay, that’s pretty intuitive. But water is thin, so it flushes away pretty quick. Liquified fat isn’t as effective at delivering flavor to the palate, but its viscosity causes it to linger on our tongues much longer than water would. Soooooooo, the flavoring components in butter sauces–purge, wine, garlic, lemon, stock, etc.–are sublimely detectable in simple butter emulsions. Sauces thickened with flour cling to the tongue, but prevent the nuanced flavors from coming in contact with our taste buds. Chefs figured this out. Chemistry, Berber.

Some sense of proportion.

Okay, okay, how do you do it? I’m getting to it. We want to figure out how to use clarified purge/sous-jus in a sauce, without resorting to just adding some shallots, wine and flour. You guys know, I call that Gray-Gray. So, we are going to make an emulsion type sauce with just purge and butter. No flour. Keep the flour in your pocket.

Butter is the most common fat in hot emulsions, like Hollandaise and Beurre Blanc, Monté au Beurre, whatever you want to call it. Vegetable/olive oil is the standard in cold ones like mayonnaise. But butter is not 100% fat. Read my article on EMULSIONS for more detailed background on this.

The amount of butterfat/milk solids varies with quality, brand, manufacturing methods, and other things. But this balance affects the success of butter sauces. Knowledge of the balance of butterfat to milk solids in your butter is the difference between success and failure in your emulsion. So, how do you calculate just how much purge/water is in your butter? You can’t. At least, not at room temperature.

Most recipes for butter sauce call for the incorporation of COLD butter into the water base–purge, cream, wine, lemon, vinegar, etc. This presumes that the person furiously whisking the emulsion has enough training to make real time adjustments to the sauce while he/she makes it. It’s possible, with lots of practice, to see the signs of which way the emulsion is going–too thin, it breaks, too thick, it breaks.

Thankfully, there is an easier way. I don’t know if I was the first to figure it out, but I never saw anybody else do it. I don’t get out much. God bless the man who invented stick blenders. Melt the butter. Don’t boil it, but melt it. The sous vide bath is perfect for this, as you will see. Once the butter is melted, the butter fat is on the top, and the milk is on the bottom. After you become more proficient, you may decide to remove the milk solids, and replace that volume with other flavorings, like reduced wine, acid of some sort, etc. As long as you don’t agitate the melted butter too much, it’s possible to pour the oil off the top. What you do with the milk solids is your business. They are wholesome, but not particularly useful for anything else. For the exercise today, we will leave them in.

That’s because the actual ratio of oil to water (base) is not the only contiguous component of the process. In other words, like sous vide, standards of temperature and even time must be satisfied. Culinary emulsions like temps above the melting point of oil, but not above 140F or so, depending on the stability of that particular emulsion.

If you’ve ever tried to make an emulsion before, even a simple vinaigrette with a little mustard in it, you probably know you can’t just put all the stuff together and mix it up. Actually, if you do that, you are creating an emulsion. It’s just not a very strong one, so it comes right apart. All emulsions separate eventually. If the mayonnaise is left on the counter long enough, it will dry out, meaning the balance of water to oil changes. Presto, the mayo breaks. Not enough water to hold the oil.

Metaphorically, and anthropomorphically, the oil droplets must be convinced that they are the same size as their dreaded enemies, the water droplets. This requires that the distinct surface tensions of the two liquids must be interrupted, and then FORCED to become identical.

The easiest way to do that is called

Start with this simple exercise. Everything is measured by VOLUME:

Combine in a Ziploc bag:

Melt in the sous vide bath @165F. I know, that’s too hot. Indulge me. The emulsification process removes quite a bit of heat, because, the FRICTION forces the heat up into the air above the glass. Again, just the opposite of what you might expect. Cream, garlic, mustard, and many other things are actually either emulsions or emulsifying agents, so they make emulsions easier to make. For the purposes of this exercise, we will forego all the little tricks.

Salt and Pepper go into emulsion sauces, but they are not part of the chemistry.

Once the butter and purge mixture melts, pour the contents into a cylindrical container that the stick blender JUST fits into the bottom of, like a 16 oz. rocks glass. Most of us have one of those. This, and the stick blender, are probably the most important aspects of this process.

Don’t try to hack tilt a container with a larger bottom. Do what you gotta do, but use a glass container like this. Insert the stick blender, all the way to the bottom.

Start to pulse the blender.

DO NOT LIFT IT UP!

I cannot stress this enough. There is an innate urge to lift up the stick blender. Resist it, stay strong. Watch the bottom of the glass, and you will see the water start to pull in the oil.

Actually, the oil may be pulling in the water, but it doesn’t matter how it  looks. In the accompanying video, you will even see a little vortex thingy where the two liquids are being merged into an emulsion. Don’t think about it too much. Just watch, and pulse. Eventually, you can TILT the stick blender to get at the oil up top, but even then, haste can break the sauce. There is a way to repair it–just finish breaking it and start over.

Eventually, there may be a tiny bit of oil on the top of the sauce, which is now yellowish white. Use a spoon to fold the rest of it in, we are golden. Literally.

With practice, most people get a little bit more brave, and fold in more and more butter. If you do this successfully, the sauce will get thicker and thicker, almost as thick as a velvety veloute, which is a redundancy. Most of us incorporate things like cream and garlic, an egg yolk, etc. all of which are emulsions on their own, except garlic. Ground up, garlic will function as a stabilizer in emulsion sauces. You will see. 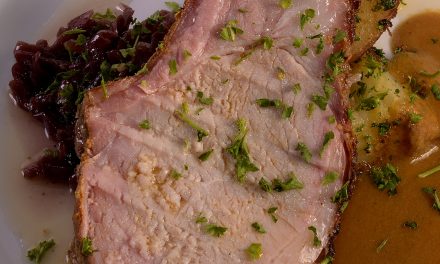 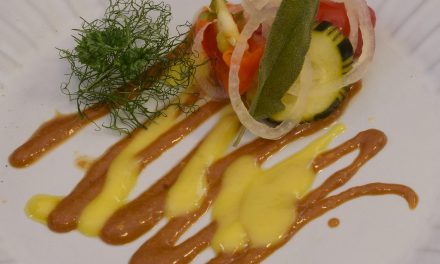 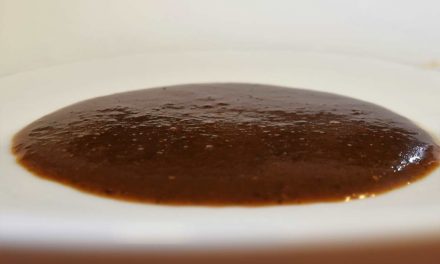