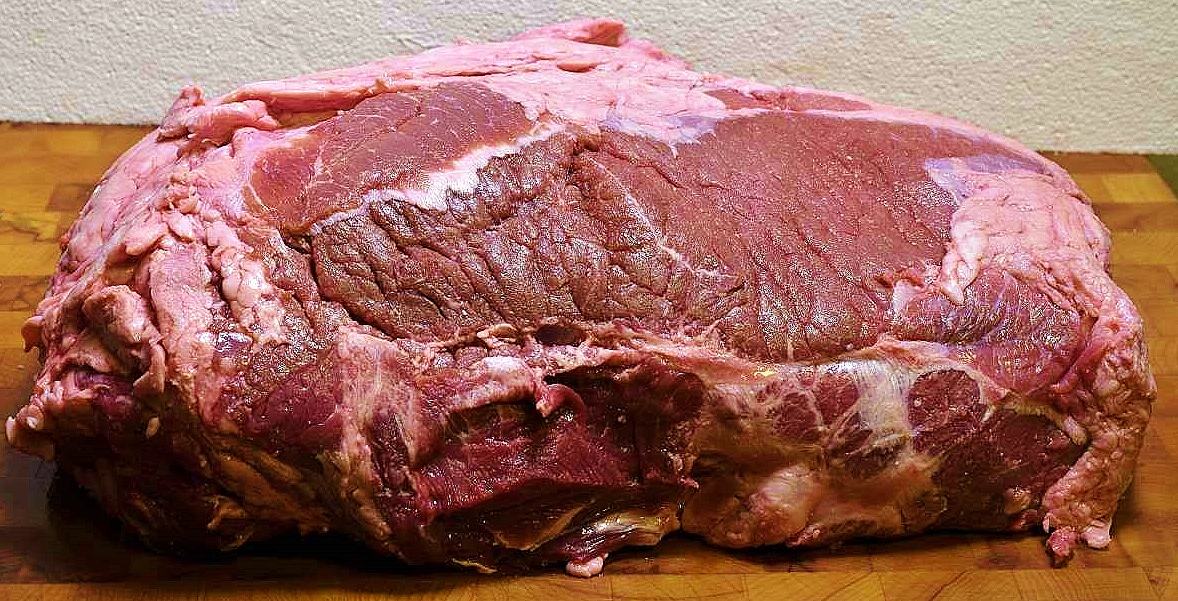 The round part of the top inside

Beef top/inside round is always present in the butcher’s case, but not usually under that name. Working literally from the ground up, as much as a third is commonly used to make hamburger. Unfortunately, the term “ground round” refers to the balance of fat to lean meat and not necessarily the cut being used. This is yet another example of the industry’s efforts to make bovine anatomy as confusing as possible.

Top round is used to make stew meat, among many other things. Stew meat is usually labeled specific to size rather than the cut used. The contents of the package could come from just about anywhere on the animal. This “character actor” cut is also used to make “Swiss Steak,” “Chicken Fried Steak,” “Minute Steak” and other steak-like things that are optimistically run through the Jaccard machine in a vain attempt to somehow tenderize them. Top round is a tough cut of meat, there is no debate there.

The most esoteric code name for top round must certainly be the mother of all self contradicting terms, “London Broil.” Without going into the pretzel-like reasoning behind this label, we will chalk it up as yet another effort on the part of “profit maximizers” to sell a tough cut of beef at a premium price. They would also have us believe that London Broil benefits from being marinated. The two misconstruances are almost always mentioned in the same breath. While we are on that subject…

There isn’t enough marinade in the universe

Marinades do nothing to tenderize, at least according to the science. There is no marinade that can replace or assist in the effort to convert collagen to gelatin, which is what the tenderization process entails–moist heat over time. Who needs chemical assist tenderization anyway? We have sous vide! Above: skin side up. The bottom of the slide is where the top round meets the shank. Above: rotated 90 degrees to expose the hip/sirloin end. Above: the femur bone runs along this line. Three muscle groups combine to fully surround the femur–the top round, the bottom round, and the eye of round. The hip end of the top round connects to the area of the steer generally referred to as the sirloin. It is considered to be more tender than the end of the top round that connects to the shank/knee. Just a fun fact. By the time we get everything taken apart, we won’t remember which was which anyway. Sometimes you will even see a little fragment of bone from the hip. Be careful to remove that so it doesn’t find its way into the grinder hopper. The picture above shows how the top round is “squared” to create the “London Broil” appearance common in market bins. The area to the left of the polygon creates a lean cut that is extraordinarily tough and dry. Even sous vide has difficulty transforming this cut into a steak or roast. More on that in a moment.

After squaring, the area to the right of the polygon is composed of numerous smaller cuts separated by a considerable amount of gristle–this is also where the femoral vein occurs. Cuts from this section require less time to be tenderized using sous vide than the rest of the top round. Along with the cuts removed from each end of the “center” cut, this can amount to as much as 20% of the original total weight.

Some of these randomly shaped cuts are large enough, uniform enough and tender enough to be transformed into steaks–provided sous vide is used to assure their tenderness. After processing, they can be used to make pre-assembled “brochettes,” Beef Stroganoff, etc.

Compared to what is sold in the market and fast food restaurants, the sinewy trim itself is almost lean enough to grind on its own. “In the old days,” we would roast it, drain off the fat, chill it, and grind it into to what was then referred to as “forcemeat.” This was used to make savory fillings for canneloni and stuffed pastas, etc. We will dedicate at least some of it to BROWN STOCK.

Where the shoe leather hits the road This is the piece that we removed from the left side of the polygon. Some butchers and chefs tie it and utilize it as a roast, but I have had difficulty transforming it successfully into anything but things like cook-apart pot roast or shredded beef.  We are going to use it for something else–a comparison between meat that has been salted and meat that has not. This will be fully explained in another upcoming article.

Ultimately, the center cut is sliced to create London Broil in the form that it us usually displayed in the butcher’s case– roasts that weigh between 2-3 lbs/1-1.5 Kg. This root article will be referred to as we build a database of recipes for top round. Visit these links to see the subsequent incarnations:

SOUS VIDE BEEF TOP ROUND SERVED AS A STEAK 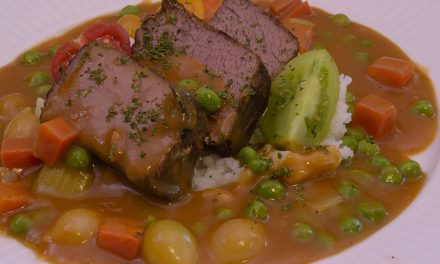 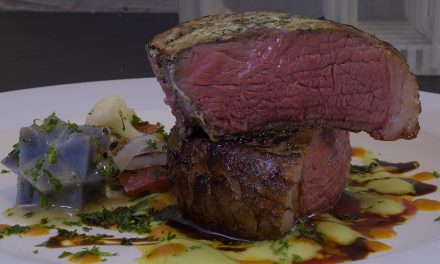 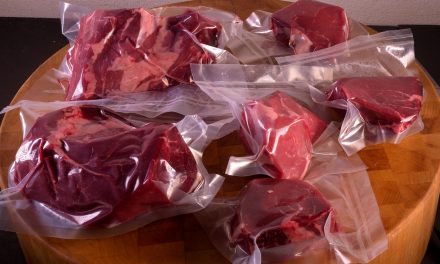