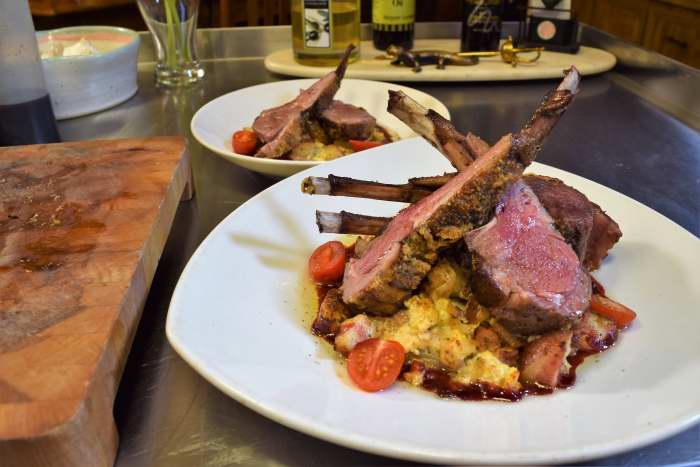 A lot of people unfamiliar with lamb are under the impression that it tastes somewhat “gamey.” Due to breeding and diet, modern lamb tastes about as different from beef as, say, turkey tastes from chicken. It definitely tastes more like beef than pork tastes like either one.

Unfortunately, people’s bad experiences with lamb are frequently associated with the fact that lamb fat burns very easily. Lamb fat has a high melting point, because it is high in stearic acid. If we treat it like beef, it can develop a very bitter and unpleasant crust and aroma. If you roast or broil it with the bones exposed, they will almost certainly scorch, and even catch fire like a candle.

There are ways to avoid these pitfalls, which we will explain here.

HERE is the link to the concise recipe

HERE is a fun little video too! Sprinkle the fatty side with S+P, and lay in an ovenproof pan or skillet heated to

Brown the lamb, but be careful not to scorch–this process does not take very long. Since the fatty side is somewhat rounded, I scoot the pan over on the burner and lean the lamb on the side of the pan. Flip the rack, and brown the bottom side a little bit, not much. Set aside. Paint the top surface lightly with Dijon mustard, or any mustard that you like. Powdered English mustard is pretty hot, but people seemed to like it in the 70’s. They may have felt obliged to; back then, many people were too intimidated to complain in fancy restaurants. This doesn’t seem to be a problem any more.

Sprinkle the top with fine bread crumbs. Sometimes I make my own, but purchased bread crumbs are fine: they are made from bread. In the old days, we would trade stale French bread back to the bakery for fresh, and they would use the stales to make crumbs. Then they would sell the crumbs. This idea would be unthinkable in the modern era of paranoia about terrorism and wackos putting weird stuff in Halloween apples. We were instructed to wrap the bones in foil. If we hesitated, the chef would offer us parchment as an alternative, even more annoying. I haven’t seen it done in a while, but it really does make a difference. We used to actually make those little paper frilled hats to stick on the bones too. Now it’s hard to even find them to buy…I make them once in a while just for fun. One of these days, I’ll stick some on a chicken drumstick or something. Dice 4, medium sized, well dried red potatoes. Toss the potatoes with 2oz/50ml vegetable oil. Add the potatoes to the pan, and make sure that each potato cube comes in contact with the surface of the pan–this prevents sticking. Do not stir yet. For this application, the potatoes need only be slightly browned. Again, avoid over stirring. Check your email, your FB notifications, something that takes about five minutes. Sip a beverage. Once the potatoes have started to soften and seem a little dry, add chopped onions, about 1/2 cup/50g. If you add the onions too early, all that steam in the pan will give you a mushy result. Once the onions have become translucent, add 5ox/125g chopped ham. Add the mixture to the large bowl with the egg, toss lightly, and return to pan. Heat slightly, but do not boil again.

Cover the potatoes and set aside.

Back to the Lamb. Preheat your oven to

Put the lamb in the oven and roast until the crust is lightly browned–approximately ten minutes.

If you gently squeeze the ends towards each other, they should feel “springy.”

Everybody has a slightly different idea of what “springy” means, but you can use a probe thermometer–

Cut ONE CHOP OFF. If it is too rare for your taste, put it back in the oven for just a few minutes. This looks right to me. It feels right. It scooched just a little bit. Turn the oven on broil.

Put some of the potatoes on your plates. Broil them until they get brown on top, and you will see a little butter come out around the edges. Drizzle some Cranberry Paste around the outside.

Put some Pear Membrillo in the center.

Cut the grape tomatoes in half and arrange. Cut the lamb into chops. This one is for my wife, she likes it a little bit more done, and there is no shame in that. I use the propane torch on the cutting board or right there on the plate, while she watches. Arrange the chops so the bone is standing up high, and shingle from right to left.

Those of you who know me know why I do this. If you have never heard of the 7 o’clock rule, you can visit us HERE and ask me in person! This is a wonderful dish, and much simpler to prepare than many dishes that not nearly so impressive.

For me, a properly prepared Cheeseburger is much more complicated than this. 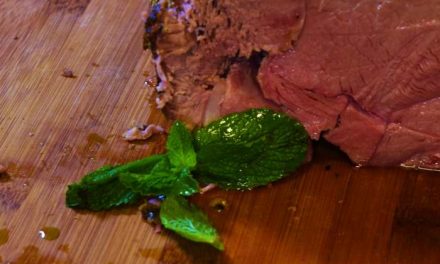 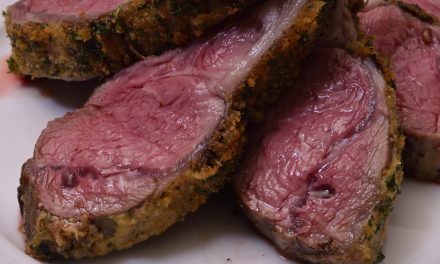 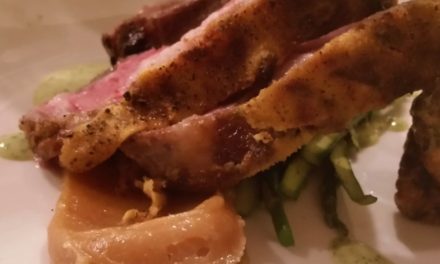