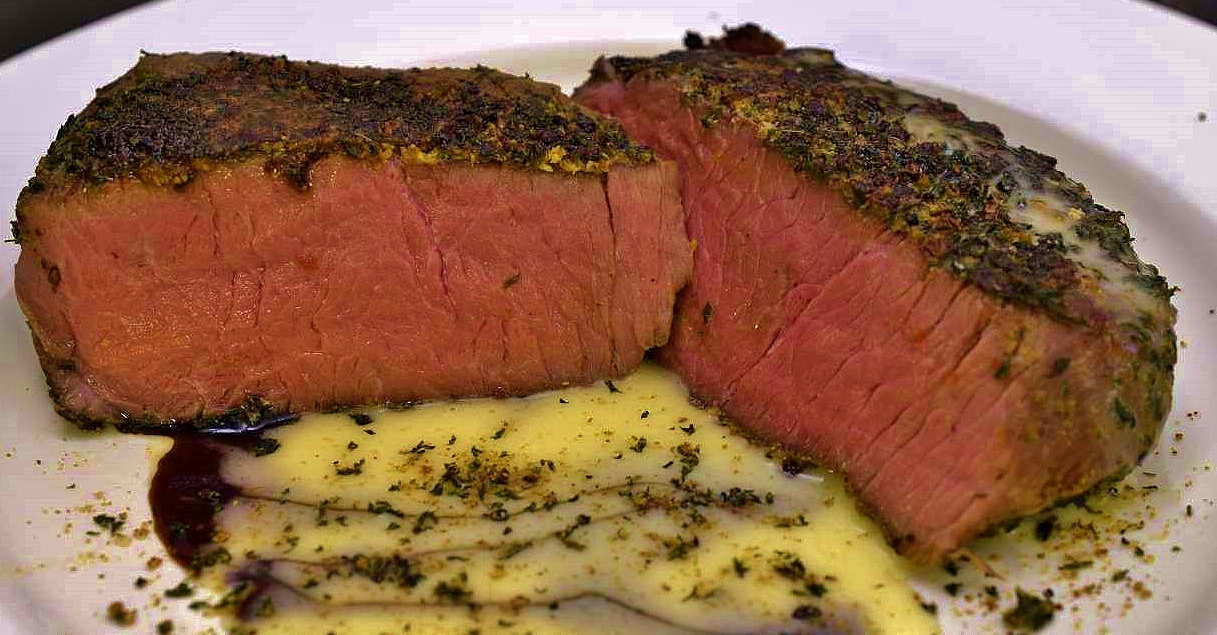 We have taken a special interest in beef top sirloin. The whole primal cut is often available in many of the big box stores. It is much cheaper per lb than the New Yorks, rib eyes and beef tenderloins, and you can save quite a bit of money if you  break it down yourself. Otherwise, any top sirloin steak from the butcher’s case will serve perfectly well.

We explain how to easily disassemble a top sirloin in the article you don’t have to be a butcher. The cut usually weighs somewhere around 15 lbs, which is substantial but not too much for most people’s freezer capabilities.

Top sirloin has more collagen than the premium steak cuts, but responds well to the unique tenderization properties of sous vide. The processing interval is usually extended to 8-12 hours instead of 2-4, but there are no other major differences in the handling or temperatures used. The moisture loss due to the increased processing time is negligible.

The best thing about using sous vide to process top sirloin is the fact that this particular cut is very high in myoglobin. What this means to steak aficionados is that, unlike the more expensive premium cuts, you can process it, shock it cold and then retherm it by any of a number of methods without sacrificing the favored “red” or “pink” coloration. People who prefer their steaks cooked to a greater degree of apparent doneness will also notice that even when served well done, the steak still maintains more discernible moisture than a well done filet or New York.

If you are interest in top sirloin processed as a roast, you might want to visit HERE and/or HERE.

We also feature recipes for top sirloin with a little less patter on Lipavi.com HERE and HERE.

There is a short slide show explaining how to make demi-glace from the top sirloin trim, linked HERE

Other stuff if you want to duplicate the presentations:
Onion, medium, one each. Sous vide process the onion at 183 F/84 C and shock cold. I usually just put it in a ziploc quart bag and clip it on the side of a pot of slowly boiling water for a while. We’re not refining plutonium here. Shock it cold and peel it, but leave the root end intact–just trim off the little hairs. Cut the onion in half on a little angle–see below.

Mushrooms, whole as needed.
Grape (or cherry) tomatoes as needed. I peeled the one in the picture, and before you roll your eyes, it takes about ten seconds with a torch to build the blisters. Let it sit for a few minutes and you can peel it like a grape, if you’ve ever done that. Even easier.
Blue cheese as needed.
Demi-glace as needed.

If you prefer your beef cooked to a greater degree of apparent doneness, the original processing temperature can be adjusted according to the guidelines outlined at Doneness Preferences. Tenderization will occur faster at higher temperatures–read on!

Time determines the texture/tenderness of sous vide processed proteins, but time cannot be used to MEASURE tenderness. If you are interested in determining the level of tenderness of your sous vide project in real time, familiarize yourself with The pinch and poke method.

After the processing interval has elapsed, you can move on to the next step or you can shock the package in iced water until it achieves 70 F/21 C. Refrigerated to 40 F/4 C, the steak can be held at 40 F/4 C for at least two weeks before either proceeding to the next step or utilizing in another application. Never put a hot sous vide package in the fridge–home refrigeration equipment is not designed to chill hot foods in a timely manner and the heat from your package can damage other foods in the vicinity.

Dip the chilled package in hot water (or a functioning sous vide bath) for five minutes to dissolve the gel. Remove the steak from the package and pat dry with a towel. The juices in the bag can be processed as per our method HERE but in the case of individual steaks, the release is usually negligible in volume.

Most recipe and method resources have finally admitted that nothing other than sodium ions can penetrate the surface of land or air dwelling proteins. The article “Post Processing Rubs and Crusts” explains in detail how to apply the crust before searing.

Most kitchen ovens have a warming function these days. I put the plates in there before I start searing. Genius, I know.

Heat the skillet to approximately 400 F/200 C. If you use a thermometer, you will notice that the readings from a dry pan are a lot cooler than the readings taken from a few drops of oil in the pan. Put the thermometer back in its holster for the moment.

The bootstrap method is to get the pan seemingly hot, add a few drops of oil and then LISTEN to the sound that the steak makes when you put it in. Professional cooks do this every time, all day. If you hear nothing or mild steaming, it is too cold. If you hear (and see) popping, it is too HOT. Adjust your burner accordingly. If you hear sizzling, you nailed it. Take note of how you did it.

If the steak is warm out of the bag, the searing process will take no more than a minute on each side, if that.

Note: The Health Department does not recommend bringing steaks to room temperature before searing and neither do I.

If the steak is at 40 F/4 C, pretend that it was never sous vide processed in the first place. You want to hit at least 125 F/52 C, and my best advice is to depend on your sublimely relaxed mind and calm hands to achieve this very intuitive and forgiving task.

Make it brown and turn it over. The crust is durable, but anxious over-handling of the steak can remove it. Remain calm.

The steak may not be uniform in shape–lean it up against the side of the pan to brown all the surfaces.

There are three sides to every discussion. Remove the steak from the pan and reduce the heat to medium. Put the steak in the warming oven or a warm place on top of the stove.

Add the mushroom and the onion to the pan, flat side down.

The mushroom will go fast, let the onion brown–watch the edges. Excessive handling will make the onion fall apart. Relax.

Carefully turn the onion over.

Sprinkle with a little rub. I mixed some chopped parsley into the basic seasoning.

Use a paper towel to soak up the excess oil.

I flip the towel after a few seconds.

Add a pat of butter, turn off the heat, return the steak to the pan and coat everything with the butter.

I get lots of compliments on my presentations in the Facebook Group. Meanwhile, my former colleagues still mock my lack of artistic vision, so I figure I am somewhere in between Picasso and the guy who did the Velvet Elvis stuff.

Put the food on the plate, and make sure you have empty space around the food. Try to gain some dimension and altitude. Follow the 7 o’clock rule, which means put the meat where it is in the picture above so the diner doesn’t have to reach over all the other food to get a bite of steak.

Drizzle a little EVOO over the tomatoes, a little seasoning for detail. 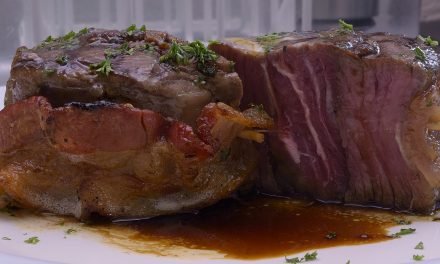 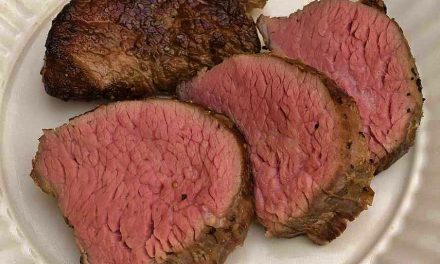 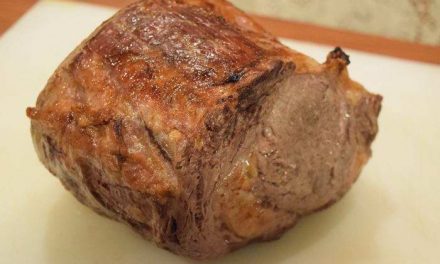 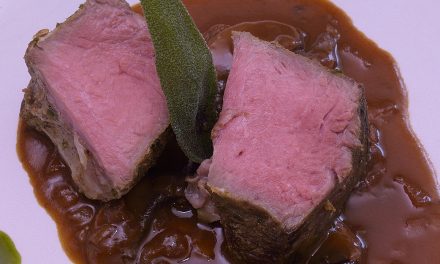